Either a Storm or a Drought


Curated by Load Na Dito, Either a Storm or a Drought was a deconstructed screening of video works by artists in the Philippines.

Referring to ideas that are commonly associated with the Filipino weather, Either a Storm or a Drought explored the ever-changing, unforeseeable and idle state of the life in the Philippines. The works introduced here playfully portrayed transient and unsettling situations that draw visible and invisible borders between personal, social and political territories.

Set up in a casual arrangement for self-directed viewing the event took place throughout an evening of socializing. Emphasizing the social space,  Mark Salvatus and Mayumi Hirano of Load Na Dito created a temporary installation using materials that were found in the Artspeak storage space. Visitors were encouraged to look around at their own pace and the team at Artspeak welcomed guests who dropped in with refreshments and casual discussion.

A brochure for the project was created by Cheyenne Rain Le Grande. The event was produced as part of the Pacific Crossings residency, hosted by Artspeak and Western Front.

Kaleidoscape uses the visual elements of infrastructure (steel frames of billboard structures, railways, wires and electric posts, and power transmission towers) in an urban weave of Metro Manila to create a space of contemplation from the city’s chaos. Bringing these to the fore heightens the legibility of urban connectivity and alienation. A calm from chaos provides a momentary escape from the complexity, confusion, and congestion of urban life. An immersive installation of this work is intended to create a space of contemplation within a city.

The abstractions of images, bodies, and experience in the numinous technologies of moving- image practice (and art in general) may point to methods of divination as potent alternative models for producing, reading, and thinking about the already inherently spectral medium/apparition that is cinema. Taking off from the popular conundrum “If a tree falls in a forest and no one is there to hear it, does it make a sound?”, this project combines video, performance, field recording, and crematorium soot imprints laminated on found film in an attempt to explore the traces of both living and dead, and the haunted convolutions among dream, perception, memory, language, desire, and extinction.

The work, showing glitch image of dancing girls, is made up of two components: Salvaged audio from a news report of a police chase – hence the title; and a video clip of a random local ‘sexy’ dancer act, both sourced from the internet.

Part elegy, part parody, Negative Cutter delves into the qualities that surround the idea of endings and obsolescence. Using the form of ‘end credits,’ as a kind of cinematic trope, it takes a closer look at a disappearing trade which are the negative cutting services that used to be vital in the distribution of Hollywood feature films. As the film industry tethers on the brink of total transformation from analog to digital processes of post-production, the job title of ‘negative cutters,’ who have occupied the bottom section of the rolling credits for several years, face the possibility of becoming obsolete. The process of negative cutting is described as manually cutting motion picture negatives or film rolls to match the editor’s final cut before distribution. In movies produced in the post-digital age, negative cutters have disappeared from the credits’ list.

As a kind of formal composition, the work explores the paradoxical nature of paying tribute through digital video in creating a pseudo-collage, of cutting and pasting together appropriated elements from films. It also explores the nature of the ‘end credits’ as an integral part of our visual culture with its own set of significations. Furthermore, in magnifying what could only be perceived as ‘residual’ in the whole spectacle of film-making, the works presented also serve as commentary on seldom-noticed variables behind the main attraction, which are the labor force and the complexities that arise from constantly changing technologies.

This work is inspired by the one of the many stories told to us by the artist/tour guide Carlos Celdran about the old Spanish walled city in Manila, Intramuros. He said that before there used to be 7 Churches inside and many government offices and universities. But most of it has been pulverized by the bombing of the city by American forces trying to rat out the garrisoned Japanese during World War 2. Leaving Manila as the second most devastated city during the war.

She graduated Tokyo Zokei University and finished the research program of CCA Kitakyushu. She did research in the Philippines as a researcher of Asia Fellowship of Japan Foundation in 2016 and the Japanese Government Overseas Study Program for Artists (short term) in 2017. She currently stays in the Philippines half of a year and does research about spiritualism and creativity in the Philippines, and explores how to express the things that she got from the research as her art works.

Based in Bacolod on Negros Occidental, Manny Montelibano is a video and sound installation artist, film and stage director, editor, and technical specialist. His work focuses on the psychology of contemporary socio- political, economic and religious structures. Home Sale is one of Montelibano’s recent video works shot by a thermal camera, which address issues of economy, politics and psychology around Filipino ideas of security.

Looking at the absurdities of urban life in Metro Manila, the original video work showed the entire 3-hour commute of the artist (which included walking, jeepney and train rides,long lines), as he travelled just 12 kilometers that crossed three different cities, from his home in Banuyo, Quezon City to General Luna, Manila, and back. Mapping the artist’s way from his home to his work space, the video work serves as his personal, intentionally frustrating, and literal “step-by-step” commute.

Precedence of life according to Mr. Ped Xing,2017 By Rico Entico 6:52min

In a dark, dusty box, surrounded by metals and concrete. Oftentimes, when nobody watches, I mimic what I see. Yellow headed men who would come and destroy the road. Fixing it again days after. Others in coloured outfits, taking turns on their silly dancing and collection from random metal moving. I wait in my place as people stare when I turn red. Some would stop, others just stare…they begin to wait…before i turn green. Bang! Bang! he looks like me now. All red….a familiar face in the night. Meanwhile, I am trapped in my box until the lights go out.

When I was a kid, I had really bad motion sickness, and the only way for me to cope with being on a moving vehicle was to focus my vision on a certain point rather than letting my eyes shift. It was a way to take control of something I otherwise had no control over.  Growing out of my motion sickness came with a newfound thrill of being in motion.

With ‘Seeing Machines’, I was thinking about different kinds of structures. More than buildings, built spaces, and transportation, I became interested in the power of the camera and the structuring in our own vision. I wanted to experiment with the frame, and the movement of things in and out of it. I wanted to resist the desire to look or go elsewhere, and see what was in front of me.   ‘Seeing Machines’ documents three important arteries in Toronto: the Spadina streetcar line, the National railroad, and the pedestrian tunnel connecting the city’s two main subway lines.

This video is the second collaborative project I created with my daughter, Luna. We are seen sleeping on a makeshift bed stage in our backyard with surrounding soundscape crated by Luna by recording an ASMR (Autonomous Sensory Meridian Response) of her eating merienda (chips and milktea) merged with the environment sounds on our garden around 8 am. Layered on that is a video of several pictures of safe spaces of different creatures temporarily tattooed on some of our body parts, being moved onscreen by massaging each other. Each element of the video pertains to feeling good in order to make work, and make our relationship work as well as make ourselves work well.

Our collaboration is an answer to how to make things work as a family unit that deals with mental illness as much as it is about the work that we do in order to create a safe space for us to make make meaningful work as artists.  Much is needed from the both of us in order to make our small family flourish. Insisting on showing the invisible work of taking care of each other, and not losing hope by manifesting our desire to create a safe, and comfortable future for us. 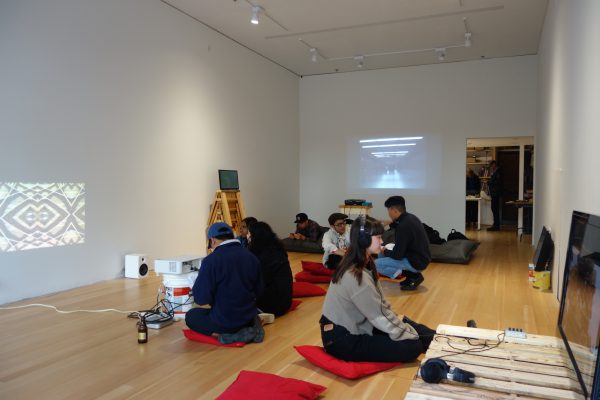